Geography lesson. Alice is asked to list all neighbour countries of Switzerland. Alice is a smart girl and she responds: “Germany, France, Austria and Italy”. Few years after Alice goes to the University to study Computer Science. She receives similar question.

How to store political map of the World (where each country is represented by a polygon) in a way to be able to efficiently perform the following operations:

DCEL fully satisfied Alices requirements and is useful in many other situation where we should store planar subdivisions.

For better understanding what is DCEL, let’s have a little recap and recall what is linked list and doubly linked list.

A linked list is a linear data structure where each element is a separate object. Linked list elements are linked using pointers. Unlike an Array, linked list is not stored as contiguos location. Linked list node cannot be accessed by index (it is not random access collection)

Linked list consists of nodes. Each node holds the data and the reference to the next node.

To find an element in linked list you start from the head and follow references to the next until your requirement is satisfied or you reach the last element. To iterate through all elements you can use while loop until the reference to the next pointer will be null.

The anatomy of DCEL 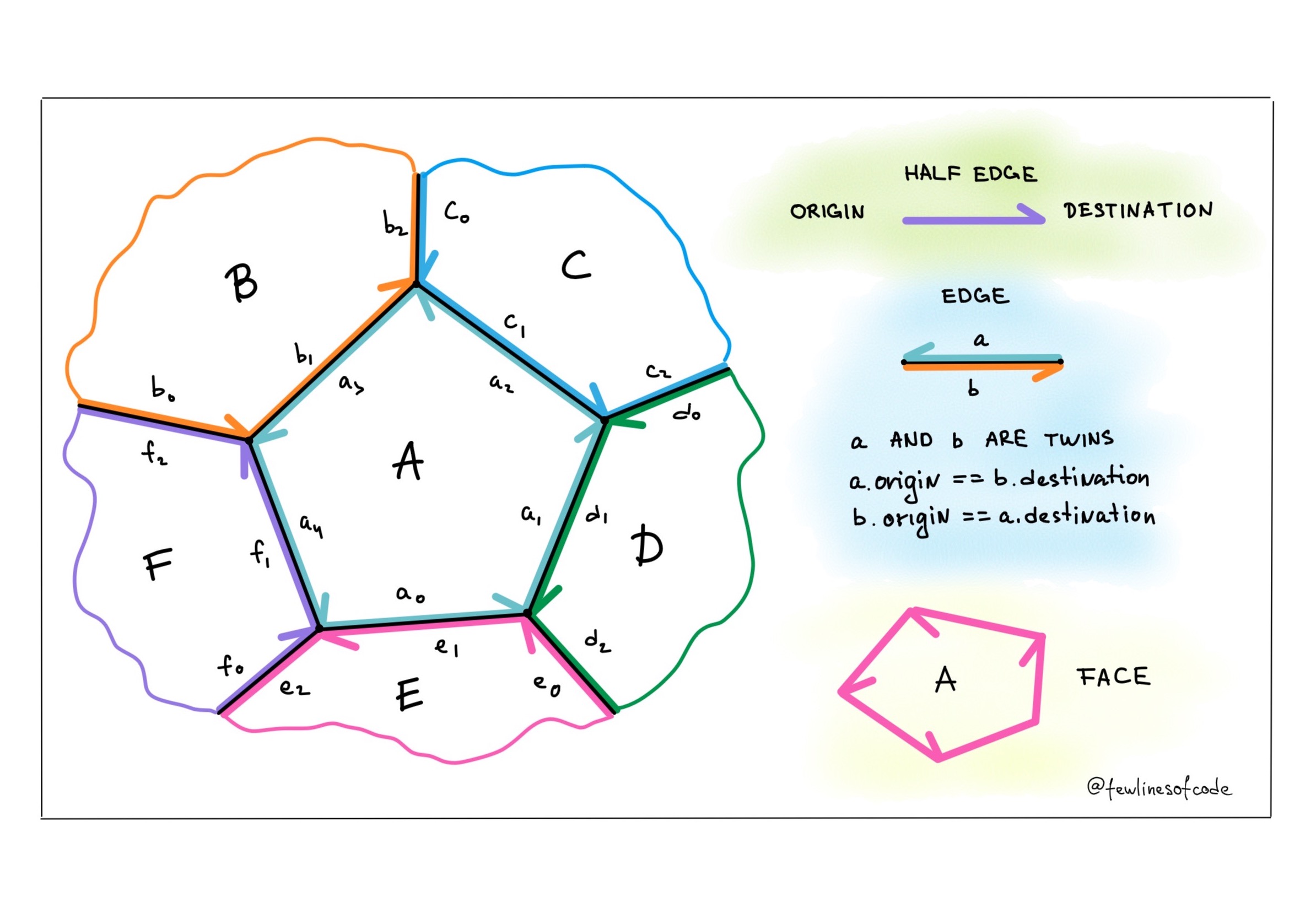 A doubly-connected edge list contains a record for each Face, Edge and Vertex of the subdivision.

Vertex stores the coordinates of the point (x, y) and the pointer to incidentHalfEdge (HalfEdge originating in this point)

Half edge Holds references to it’s prev and next - Inorder elements in a doubly connected linked list, reference to the twin and to the incidentFace. We will discuss twin and incident face a bit later. There is no point to store destination as it can be taken from twin origin. Yet you can do it if you want :).

Edge is formed by two Half edges called twins.

Edge is not explicitly defined in the DCEL data structure.

Each of the DCEL elements can hold one more reference to the satellite data of any kind. For instance – color, population number or anything else.

Some common operations on DCEL

And many more. Given a DCEL implementation it is fairly easy to implement basic operations.

DCEL without any additional operations is literally a way of data organization. It is fairly simple data structure, yet it is fundamental if you are trying to work with Planar subdivisions.

It is also worth of saying that you can modify it for the sake of convenience and sacrifice a very little of memory resources.

If you will follow me on twitter @fewlinesofcode and read next articles in Fortunes Algorithm series, you will see the simple power of DCEL.

Here is a naive DCEL implementation in Swift:

Homework for the curious ones:

How is it related to Fortunes algorithm?

Where to go from here

This article is based on the third edition of amazing book “Computational Geometry. Algorithms and applications” by Mark de Berg, Otfried Cheong, Marc van Kreveld and Mark Overmars.

I highly recommend this book for reading.